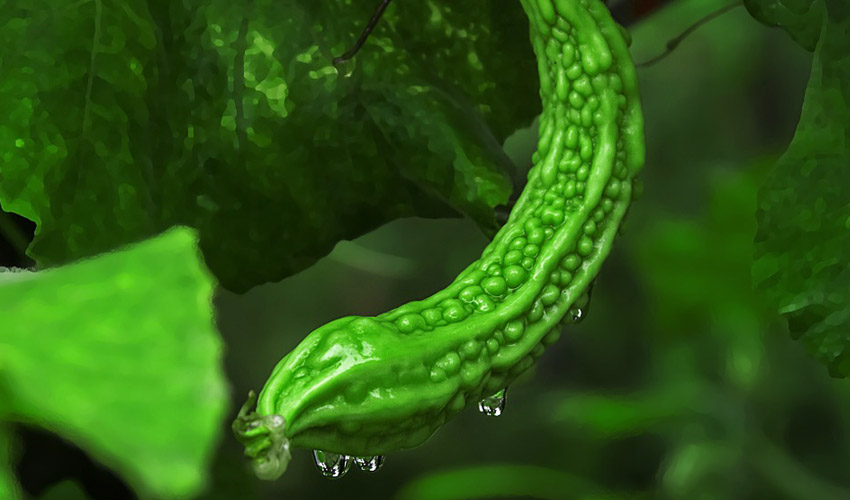 Bitter melon or Momordica Charantia is a vegetable which grows in tropical areas like East Africa, Asia, South Africa, and the Caribbean. It is a green cucumber shaped fruit with gourd-like bumps all over it. It looks like an ugly, light green cucumber. The fruit should be firm, like a cucumber. And it tastes very bitter. Although the seeds, leaves, and vines of Bitter Melon have all been used, the fruit is the safest and most prevalent part of the plant used medicinally. The leaves and fruit have both been used occasionally to make teas and beer, or to season soups in the Western world. This vegetable is rich in iron, beta carotene, calcium, potassium, phosphorus and other dietary fibers.

In many countries, it is also used as an herbal medicine due to its properties that help improve insulin production. Clinical studies show that bitter melon increases the production of beta cells in the pancreas which leads to improvement in the insulin production of the body. It is also believed to be beneficial for the liver and can act as an anti-tumor agent. Because of its health benefits, bitter melon is used by many as an alternative treatment for diabetes.

Bitter Melon was traditionally used for a dazzling array of conditions by people in tropical regions. Numerous infections, cancer, leukemia, and diabetes are among the most common conditions it was believed to improve. Bitter Melon is reported to help in the treatment of diabetes and psoriasis. It has also been thought that Bitter Melon may help in the treatment of HIV, but the evidence thus far is too weak to even consider. The ripe fruit of Bitter Melon has been suggested to exhibit some remarkable anti-cancer effects, but there is absolutely no evidence that it can treat cancer. However, preliminary studies do appear to confirm that Bitter Melon may improve blood sugar control in people with adult-onset (type 2) diabetes.

The blood lowering action of the fresh juice of the unripe Bitter Melon has been confirmed in scientific studies in animals and humans. At least three different groups of constituents in Bitter Melon have been reported to have hypoglycemic (blood sugar lowering) or other actions of potential benefit in diabetes mellitus. These include a mixture of steroidal saponins known as charantin, insulin-like peptides, and alkaloids. It is still unclear which of these is most effective or if all three work together. Nonetheless, Bitter Melon preparations have been shown to significantly improve glucose tolerance without increasing blood insulin levels, and to improve fasting blood glucose levels.