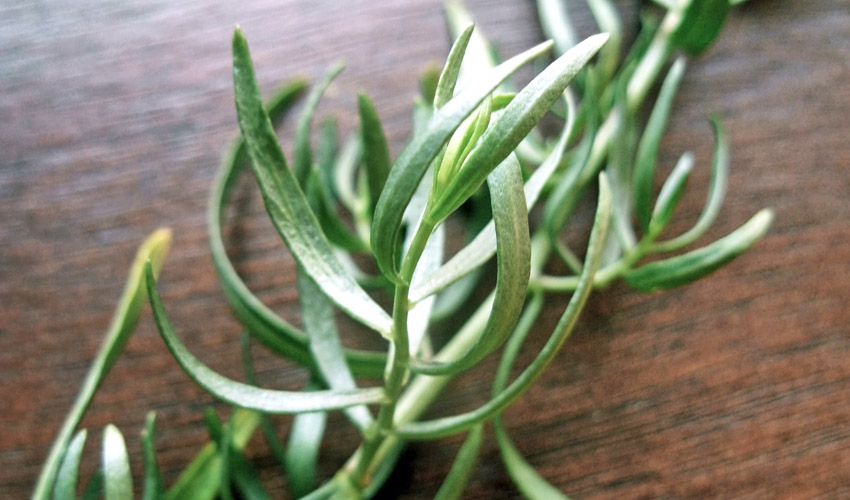 Tarragon is a relative to the Sunflower family and there are two different breeds of Tarragon, Russian and French. However, when you go shopping and pick up some Tarragon for your pantry or a favorite recipe it is almost guaranteed that you have just selected the dried leaves of the Tarragon plant because that is what is most often used and sold for commercial purposes.

Tarragon has a somewhat bittersweet flavor to it, almost resembling anise with that hint of licorice flavor to it. Tarragon does not have a long history behind it like most of the other herbs as it was not brought into the Unites States until the 19th century. It does have some mention about being used in England much before that time though. Traditionally, Tarragon is used to flavor such things as vinegar, relishes, pickles, mustard, and other various sauces.

The word Tarragon is derived from the French word which means “little dragon.” There are two beliefs about how this nickname came about; one is because back in early times it was thought that Tarragon had the ability to cure venomous snake bites. Other thought it got this name because of the distinct roots that the Tarragon plant has that quite clearly resemble that of a serpent.

However, sometime as early as the 13th century Tarragon became widely used for seasoning vegetables, inducing sleep, and as a breath freshener. Not until the 16th century did Tarragon become more widely known. The Tarragon that is sold in the US today is not true Tarragon but rather Russian Tarragon which is not nearly the same. True Tarragon will be called French Tarragon and if you want to be sure that is what you are getting it is best to grow your own.

It is not recommended to use dried Tarragon because all of the active oils have been dried out. It is best to use fresh Tarragon which needs to be used rather sparingly because of its pungent taste. If you have grown the Tarragon yourself and have harvested it then put it in a Ziploc bag and stick it in the freezer. When it is time to use it there is no need to defrost it but remember that heat intensifies the flavor of Tarragon. If you have ever had Béarnaise Sauce, you should have recognized that Tarragon is the main ingredient in it.

Tarragon is used when preparing many sauces. In a pinch it has been said that a substitute could be chervil, a dash of fennel seed, or anise but the flavor will not be the same.

Many have claimed that Tarragon works well to induce appetite and the root of Tarragon was once used to cure toothaches. It is linked to medicinal uses for digestive aid and also for the prevention of heart disease. It can be used to induce menstruation and can be used as a sale substitute for people with high blood pressure. Further medicinal purposes include use for hyperactivity depression, and as an anti bacterial aid for cuts and abrasions.