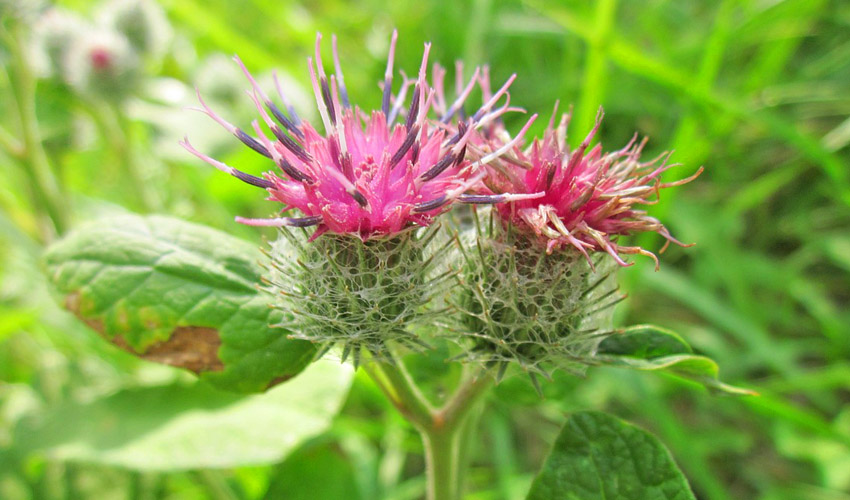 Burdock is a plant that is related to the daisy family. It is also closely related to Echinacea, Dandelion, and Feverfew. Burdock is an herb but it is one that has been much neglected when it comes to getting attention. Back in ancient times the Greeks used the roots, the seeds, and the greens and used them for healing purposes. Throughout the Middle Ages Burdock was used for both food and medicine.

Today, Burdock is still used for such things as easing liver problems and digestive disorders. It was also found to be very effective for cleansing the skin for problems such as acne and also to assist in digestive problems. To this day throughout Europe the stalk and the greens are still eaten because they hold such valuable nutrition and vitamin values.

As more and more research is being done on Burdock many new and interesting discoveries are cropping up. A relationship is being examined between Burdock and its anti fungal and anti bacterial properties, and even more important it is showing signs of possibly being able to fight against tumors and could be a cancer fighting agent as well. Research has shown that since many of the cancer causing compounds are in almost all foods which are then eaten and stored in the human fat tissues that Burdock might very well be of help in fighting cancer because of the role that it can play in depleting these mutagens.

Burdock is also very helpful in strengthening the immune system when it has become weakened by environmental factors. When mixed with other herbs such as Dandelion and Ginger it can be a very powerful blood purifier. The most unique fact about Burdock is that it has a very high amount of inulin which is a natural occurring chemical within the body that mimics actions of insulin. Because of this, Burdock has been successful in helping combat hypoglycemia and pre diabetes conditions.

If you look for Burdock in the market you may find it called gobo instead as that is what some refer to it as. It is often combined with other vegetables or added to Tofu. Some boil Burdock while others sauté or deep fry it. Many have said it might not be such a good idea to look at Burdock before you eat it because you might change your mind about taking a bite.

It looks thick, dark, and woody but indeed the opposite is true when it comes to the taste. Burdock is well recognized as a health food because it has low calorie content and a high fiber intake. It is also loaded with potassium, iron, and calcium. People claim that Burdock tastes like nothing else. In other words it has a taste all of its own.

The best description that people can agree on when it comes to the flavor of Burdock is that it is sweet yet earthy, with a tender and crisp texture. It is often added to stews, soups, and stir fries. In the form of food, Burdock is highly nutritional and full of vitamins but in retrospect Burdock is also an effective herb for bringing the body back into balance.